The figure shows a process flow diagram of the EnviroServer ES Model.

In the second compartment, the wastewater is aerated using a high-efficiency, low-pressure air compressor and a fine-bubble membrane air diffuser assembly.  The diffuser assembly is custom-designed to ensure maximum oxygen transfer and optimum mixing of dissolved substrates and oxygen.  Furthermore, the mixing ensures the solids remain suspended within the reactor and the biomedia does not clog.  The aeration promotes the growth of aerobic microorganisms, which convert and remove biodegradable organic matter.  (The organics removed by the aerobic process are the constituents that are measured in the CBOD5 test.)

To optimize the contact time and the mean cell residence time, the EnviroServer utilizes a biomedia in the aerobic sections.  This plastic media is used to supply a support structure for the establishment of a resident bio-film and is specifically developed for optimized biological growth without clogging.  The design allows the biomass to attach to the biomedia and not flush out during high flow rates.  The biomedia also enhances the nitrification process, which requires a larger population of organisms due to the lower metabolic rate of the nitrifying bacteria. 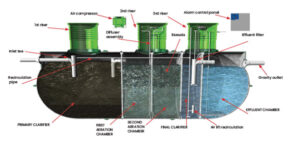 The partially treated wastewater, now low in carbon but high in ammonia, flows into the third compartment (Second Aeration Chamber) of the system and is aerated in the same manner as the second compartment.  The combination of low carbon content, high ammonia, and high oxygen levels in this chamber promotes the growth of nitrifying microorganisms (Nitrosomonas and Nitrobacter).  The nitrifying microorganisms convert ammonia to nitrates utilizing the oxygen in the wastewater.

The two-stage aerobically treated wastewater, which is now high in nitrates but low in carbon (BOD), flows into the fourth compartment (Final Clarifier) of the system where clarification and settling of suspended solids occurs. 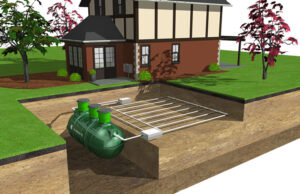 The recirculation also helps prevent accumulation of biomass in the final clarifier, decreasing the need for periodic removal.  Removing the accumulated biomass helps ensure optimum clarifier performance, resulting in an effluent with low suspended solids.  The transfer of the biomass to the primary clarifier ensures a large vital population of microorganisms for the organic and nitrogen removal processes in the aeration compartments.  When the water is recirculated, it carries nutrients from the primary clarifier into the aeration compartments.  Thus, the available nutrients are utilized to sustain the population if possible, particularly in times of low loading such as vacation periods.  In normal operation, this keeps sludge build-up to a minimum by helping break up and dissolve the solids, thereby making the nutrients available for the microorganisms.

Because of the recirculation, the sludge is accumulated and stored in the primary clarifier.  The primary clarifier is sized to hold sludge for one to three years, depending on the usage of the system, and pumping is required as needed.